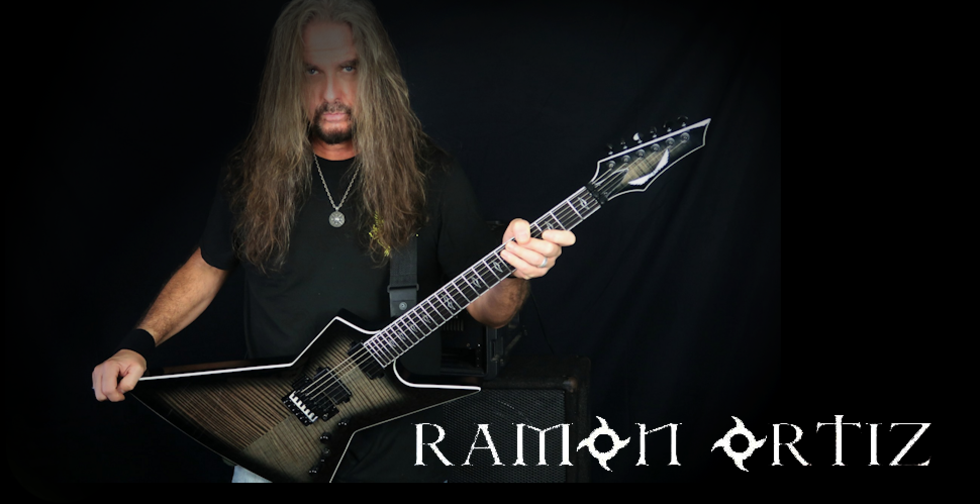 Ramon Ortiz’s career has always been characterized by the exploration of seemingly incompatible musical genres and the relentless pursuit of fusing them together. His music ranges in influence, craftily balancing traditional shred with Latin American rhythmic instrumentation and various fusion elements.
Born and raised in San Juan, Puerto Rico, Ortiz first picked up the guitar at age seven. The Caribbean island has always been a melting pot of musical expressions. Both his father and grandfather were avid guitar players and introduced him to the old Puerto Rican folk standards,a
hidden influence that would completely unfurl in his adolescence. “Back then, I was learning equally from the high voltage sounds that dominated the 80s Rock and Metal guitar revolution and the classically inﬂuenced, folkloric music of my ancestors,” Ortiz says of his early days of playing.
So with his undying love of rock and a rich musical lineage on his side, Ortiz set out to create a genre as eclectic as the culture that raised him. In 1993, Ortiz and several of the members of his high school group Whisker Biscuit eventually became Puya, which remains one of Latin America’s most revered and beloved bands. In 1999, Puya signed with MCA/ Universal, and recorded the album Fundamental, produced by Gustavo Santaolaya. In that same year, Fundamental won the Latin Billboard Award for “Best Rock Fusion Album” and set them touring with Ozzy, The Red Hot Chili Peppers, Kiss, Iron Maiden, Pantera, System of a Down, and many others. At that point, Ortiz had proved that heavy rock and Latin music could coexist within the same musical
terrain.


Later, Ortiz formed the even heavier group Ankla in Los Angeles California. In 2006, the band was signed to Bieler Brothers and released their first album “Steep Trails,” produced by Ortiz and Bob Marlette. By 2007, Ankla was touring with Ozzfest and making their way several times across the US, Canada, and Central and South America. Ankla’s single “Deceit” was on heavy rotation on Sirius Satellite Radio’s “Hard Attack” and quickly became a listener favorite. “Steep Trails” was #12 in Hard Attack’s list of “Top Metal Albums of 2006” as published in Revolver Magazine.
Ramon began his solo career in 2012 with his self-titled album Ortiz, which reached the top 20 most-played tracks on Sirius XM Liquid Metal as published by Revolver Magazine. His second solo release Portal which featured a more proggressive sound was released in 2015. On 2019 his third solo effort the Ep Corozo was released featuring a deeper , heavier sound.Ramon was in charge of production and it was mixed and mastered by Francisco Paco Barrera at Mistique Red Studios .Its single Nuevo Nivel was in AZrockradio.com s Top Ten for 3 months after release eventually reaching the #1 position.
On that same year he was invited to be part of the show Mi Pasion Mi Vida Mi Guitarra  alongside 3 of Puerto Rico s most prominent string players.
Ramon is currently teaching guitar online ,composing,producing and performing with Puya and his solo project.He is endorsed by Dean
Guitars, Mesa Boogie Amps and Daddario Strings".